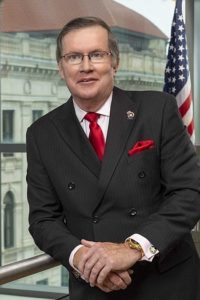 In 2007 Fitzpatrick was appointed New York State Representative to the National District Attorney’s Association and was sworn in as President in July 2015. Currently, he serves as a member of the NDAA Executive Committee. New York State Chief Judge Jonathan Lippman appointed D.A. Fitzpatrick in 2010 to the New York State Permanent Sentencing Commission. The Commission’s task is to examine New York State’s sentencing laws and policies on an ongoing basis and make the appropriate recommendations. He is extremely active in his community and has been involved with Vera House Foundation (a local shelter for battered women), McMahon/Ryan Child Advocacy Center, the Ronald McDonald House, the Make-A-Wish Foundation and several other community groups.

A 1970 graduate of Xaverian High School in Brooklyn, New York, a graduate of Syracuse University in 1974 and a 1976 graduate of Syracuse University Law School, Fitzpatrick originally began working in the District Attorney’s Office in March of 1975 as a law clerk. Admitted to the bar in 1977, he progressed rapidly over the next decade through the ranks of the office until in 1983 he became a Chief Assistant District Attorney, the youngest person ever appointed to this position. During his tenure, he was originally assigned to the Felony Trial Unit, assisted in the prosecution of homicide cases, handled violent felony cases and eventually was responsible for overseeing the prosecution of all homicide cases in Onondaga County.

After taking charge of the Homicide Bureau in 1983, Fitzpatrick took 20 defendants to trial for murder in a 3-year period with a conviction rate of 100%. In 1985 alone, he took 7 straight murder defendants to trial, convicted all as charged and all 7 individuals are now serving life sentences for their crimes. As Chief Assistant District Attorney, Fitzpatrick specialized in re-opening cases that had previously been considered inactive and, with the cooperation of various police agencies in Onondaga County and the State of New York, he brought numerous killers to justice in cases that were thought to be un-winnable.

For 5 years (1987-1991), Fitzpatrick worked in general practice of the law handling a variety of criminal, civil, personal injury and medical malpractice cases in Onondaga County and throughout New York State. In addition to his legal work, he served as an Adjunct Professor at Syracuse University Law School from 1987 to 1988, where he taught a course on Trial Practice.

Fitzpatrick has lectured extensively on various aspects of the Criminal Justice system at numerous colleges and public forums across the nation including New York State Governor Mario Cuomo’s and Governor George Pataki’s Law Enforcement Forums. He is a member of the New York State Forensic Science Commission and served on Judge Judith Kaye’s Drugs and the Courts Commission. He also played an instrumental role in establishing the Center for Forensic Sciences in Onondaga County which is used statewide and has DNA testing capabilities.

Fitzpatrick has addressed numerous groups nationally on the subject of infanticide and was personally responsible for bringing to justice a Tioga County woman responsible for the deaths of her 5 children. Waneta Hoyt, who was sentenced to 75 years to Life for smothering her 5 children over 20 years ago, was originally thought to be the mother of 5 babies who had succumbed to SIDS. Pursuing the case in 1992, Fitzpatrick’s dogged detective work led to her arrest, trial and conviction. This case gained national notoriety, had been featured on Eye to Eye with Connie Chung and is the subject of two books “Goodbye My Little Ones” and “The Death of Innocents”, the latter winning the prestigious Edgar Allan Poe award for “Best Fact Crime Book”. On related cases, he has appeared on 20/20, Dateline, 60 Minutes, Cold Case Files and Women Behind Bars. The resultant publicity from the Hoyt case has led to increasing national awareness in the medical and legal communities regarding infant homicide and SIDS prevention.